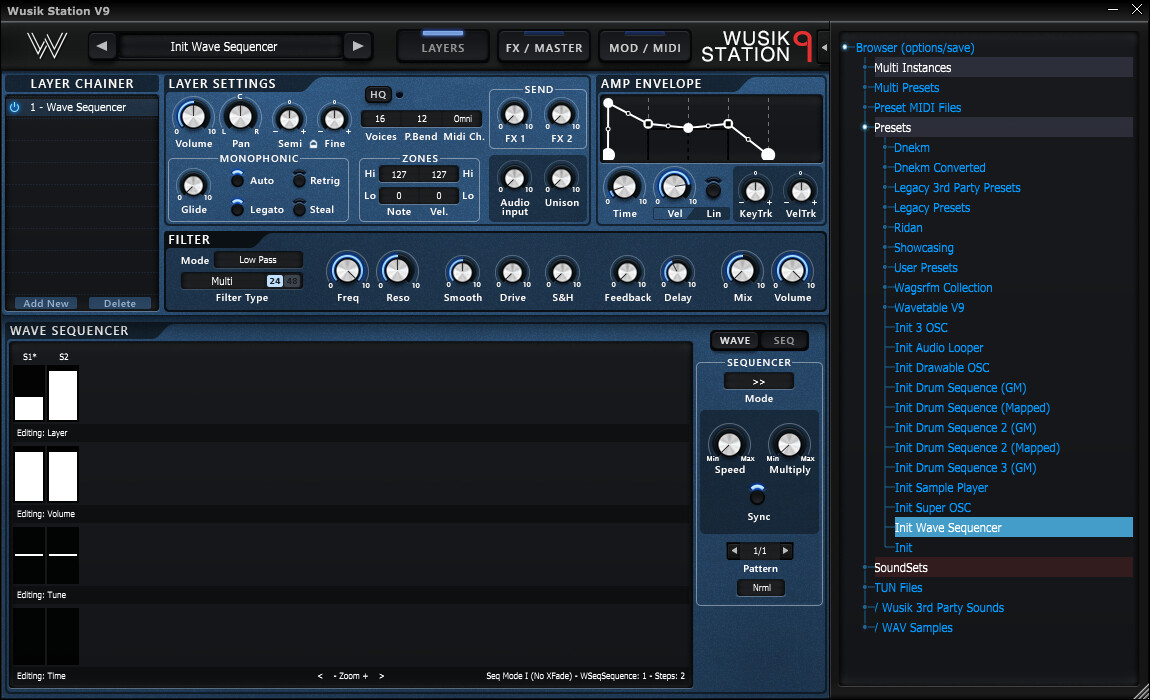 Wusik Station V9 Review: My intention was to fire up Reason, load Wusik Station V9, test it out and write a review. None of that happened nor am I done testing. Unless you quit your job (school, relationships and parental responsibilities as well) and ignore the world, you are not going to make it through the full list of presets. This is not at all a complaint. This is quite the opposite. Allow me to rewind a bit, I have never used a Wusik product until now so I had no idea what to expect. Installation was simple without a single hassle with windows 10 64bit. The Plugin is running in 64 bits as well. The daw is Reason 10. A keystation 61 was used to control the Wusik Station V9. Now you are all caught up and I can explain why I do not know what to write. Picture for a moment that you want a car. You know the car you want and when you get to the car dealer, he gives you the keys to said car and the keys to all of the other cars you could think of. That is what Wusik did. I thought I was going to hear another take on the GM soundset with a few extra goodies. Wrong. Completely wrong. Yes, there are GM soundsets and GM drumkits. There are even custom GM kits. Those are not at all what dropped my jaw. It is not what I am still in awe about. Wusik has created a device that can manipulate sounds in a way that you can press a key and hear a human voice and with that same machine you can press a key and hear a woodblock. I know that sounds like what a sampler with more than one bank can do. What if I told you that the two sounds I described had nothing to do with a sample of a voice or a wood block? Another thing I found interesting is the use of movement in the sounds. Many synths have multiple oscillators that can be used to add motion to a sound. This is the first time I have seen each layer of a single sound. Each of the multi layered sounds has it's own array of oscillators, lfos and all of the other things you would want for maximum tweaking of that specific sound. I could not get this thing to make something that was not at least interesting. As an example, there was a preset that if you hold the key it plays a four on the floor drum beat. By turning a few knobs and replacing one waveform, the drums were all but gone and I had a rhythm that I had not thought of playing. You can also morph sounds between multiple sound sources. The morphing might distract you and make you want to experiment further so be careful. This thing makes hours go by unnoticed if you let it. No matter what type of music you make, this is a must have for it's sheer amount of possibilities. No matter what type of films you make, this will help your soundtrack, foley and any other audio you need it to take care of. I went from being curious about what it can do, now I am on a mission to find out what it can't do. That mission has failed so far. Skan SkansDream.com